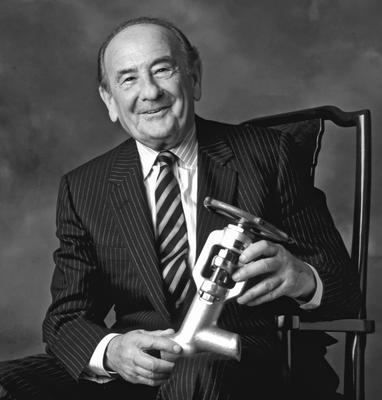 Born on February 8th, 1918, the son of a Czech father and a Polish mother, he grew up in Zywiec, Poland. His mother died of leukemia when he was only 10 years old and his father and sister died during the Second World War. In 1941, he met and married his lifelong love, Olga in Brno, Czechoslovakia. Following the war, he completed his Master of Engineering studies at the University of Brno.

After the communists seized power in Czechoslovakia in 1948, Karel and Olga escaped with their two sons, first settling in Switzerland and then immigrating to Canada in 1949. His ability to speak six languages gave him greater options for immigration. In 1950, he founded Velan Engineering Ltd. in his new hometown of Montreal and soon patented a revolutionary bimetallic steam trap, his first of many successful patents. Always a global visionary, Karel established the company’s first overseas manufacturing plant in 1954 and in 1956 he travelled around the world in order to build a network of international distributors. The company grew to be a world leader in industrial valves employing 1900 people and manufacturing valves in 9 countries on three continents. Passionately dedicated to the valve business he founded, Karel continued to come into the office until the age of 96, culminating a career of steadfast and inimitable leadership spanning more than six decades.

Karel was always a devoted family man. The family of four that immigrated to Canada grew to three sons, twelve grandchildren and fifteen great-grandchildren. He liked to laugh, tell jokes and stories, and have fun together with his sons and grandchildren. He brought these qualities into work where no meeting was considered a complete success without at least one moment of Karel making everyone laugh.

A consummate sports and nature enthusiast, he adored tennis, alpine and cross-country skiing, which he pursued well into his 80’s, especially around Sutton where he and Olga built a country home in 1949. That home and the beautiful area surrounding it would become a treasured source of memories, experiences and connections for the entire family. Karel’s love for hiking and the mountains carried him to the Alps, the Himalayas and Africa, where he climbed Mount Kenya and Kilimanjaro.

Karel had a lifelong passion for cosmology, astronomy, and physics and he wrote two books on cosmology based on his theory of the origin of the universe. This brought him into contact with Sir Martin Rees of the University Of Cambridge Institute of Astronomy and his colleague Sir Stephen Hawking. Sir Martin Rees called Karel’s book “a remarkable achievement”. Karel established two museums in Quebec devoted to the history of cosmology- the Velan Cosmolab in Lac Megantic and the Velan Astronomy Pavillion at the Domaine Saint-Bernard in Tremblant.

Karel received recognition for his hard work, excellence and devoted service to society receiving awards, notably Chevalier de l’Ordre national du Quebec; Quebec’s Entrepreneur of the Year-1996; Grand Prix d’excellence from the Quebec Order of Engineers; Engineers Canada Gold Medal Award; Officer of the Order of Montreal, the Telus Great Humanitarian Award; The Jan Masaryk Award; the Association of Fundraising Professionals Jury’s Pick Award; and Rotary named him one of the great Rotarians of the century and a Paul Harris Fellow. He was also proud to be the only businessman to receive an honorary membership of the CSN Union.

Philanthropy was always a very important priority and passion for Karel, and this went well beyond just donating money as he was personally involved in many charitable projects. Notable achievements were the establishment of the Olga House for homeless women with La rue des Femmes; establishing the Velan Foundation and the Velan Foundation Award given annually to a Canadian for “distinctive and outstanding humanitarian work overseas”; and being a founding member of the Olga Havel Foundation in the Czech Republic. In the Brno region, where he and Olga met, he created the Domov Olga as a skill center for people with special needs as well as a center for Roma children. For his work on a project for the Kanesatake Mohawk Band near Montreal, he was named, Kanerahtio (Good Leaf), and Honorary Chief of the Bear Clan Family.

The Velan family members all feel a deep sense of loss but at the same time this is a time to celebrate his extraordinary life that positively impacted and inspired so many people.

The Velan family would like to express their deepest thanks and gratitude to Dr. Ivan Rohan, Dr. Jan Schulz and Dee Davidson together with all the Complete Care caregivers who provided devoted 24/7 care which enabled Karel and Olga to live peacefully at home together for their last years.

In lieu of flowers, donations would be gratefully received in Karel’s memory by the Fondation La rue des Femmes which provides shelter and care for homeless women in Montreal.